At first glance this might look like a picture of someone’s driveway, but if you look a bit harder you’ll see it’s actually a close-up of an incredibly shiny car.

The picture, posted on Reddit, shows a black car that has been so highly polished it perfectly mirrors its surroundings.

Some soap suds, the car’s wheel and its door handle give away the apparently invisible vehicle but the picture has caused a stir online after being shared.

Many on Reddit said it reminded them of 1987 thriller Predator, which features aliens that can make themselves invisible, and can be spotted only because of the distortion around them.

One user wrote: “Dude, no kidding. That gave me total Predator vibes when I noticed the distortions.”

Many said it took them several minutes to realise that the picture featured the car, with one saying: “This is some tech the us military has been working on right?”.

Others provided a scientific explanation for the high-quality reflection, while some praised the efforts that had gone into cleaning it. 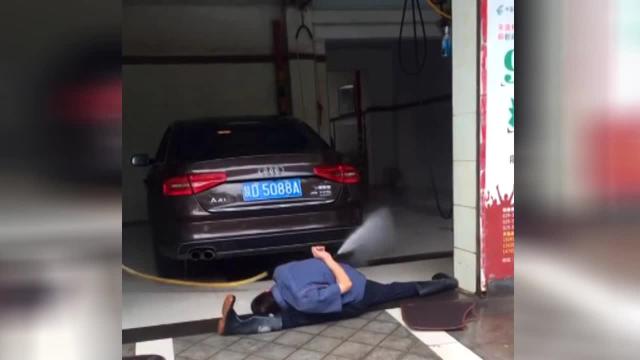 Just a cool clip from China of a carwash employee doing the splits to wash the undercarriage of a vehicle. The video was filmed in Xianyang City on August 13.

And predictably, some branded the image a fake and claimed it had been doctored.