As thousands of his supporters rally in Brazil’s capital city on Wednesday, former president Luiz Inácio Lula da Silva will officially register his candidacy for October’s presidential election from behind bars.

Official campaigning in Brazil’s most unpredictable election in decades begins on Friday with almost half the electorate still undecided.

Lula leads in the polls, but is serving a 12-year prison sentence for corruption and money laundering, which electoral judges have said makes him ineligible under a “clean slate” law. 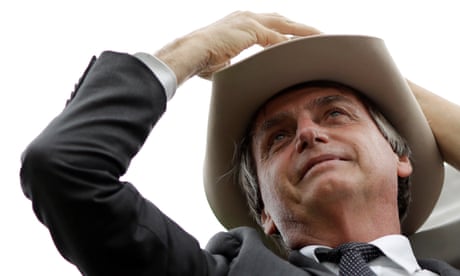 “If Lula is not a candidate – and I think there is a 90% he won’t be – that turns the election upside down,” said David Fleischer, an emeritus professor of political science at the University of Brasília.

In one polling scenario, a fifth of voters said they would vote for nobody at all in the election’s first round on 7 October. Running second in the polls is Jair Bolsonaro, a far-right retired army captain and lawmaker.

In a New York Times piece published this week, Lula said his imprisonment after a “dubious” trial was engineered by rightwing elitesto prevent him fighting an election he would clearly win.

If and when Lula is excluded from the race, his vice-presidential candidate Fernando Haddad, the former mayor of São Paulo, is expected to take his place. Manuela D’Avila, a communist party legislator, will then become Haddad’s deputy.

But while Lula was able to get his protege Dilma Rousseff elected in 2010, there are doubts as to whether he can pull off the same trick for Haddad from prison, said Fleischer. In one polling scenario without Lula, Haddad lies fifth with just 6%.

Leading that polling scenario – with 21% – was Bolsonaro, who has a tiny party behind him and just eight seconds of television advertising time. His social media operation and aggressive law-and-order stance have won support among conservative Brazilians angered by corruption scandals and rising crime – and undeterred by his praise for Brazil’s former military dictatorship.

“I bet [Bolsonaro] gets to the runoff vote on October 28. But I don’t think he will win,” said Paulo Baía, a professor of political science at the Federal University of Rio de Janeiro.

Geraldo Alckmin, the rightwing former governor of São Paulo state, is another contender, Baía said. In one polling scenario, he technically draws with Bolsonaro in a runoff vote. And after doing deals with a block of pork-barrel, centrist parties, he has more television advertising time than any other candidate.

“Alckmin has the biggest party structure, the biggest TV time and the biggest financing resources,” Baía said. “Historically this has worked.”

… we have a small favour to ask. More people are reading the Guardian than ever but advertising revenues across the media are falling fast. And unlike many news organisations, we haven’t put up a paywall – we want to keep our journalism as open as we can. So you can see why we need to ask for your help. The Guardian’s independent, investigative journalism takes a lot of time, money and hard work to produce. But we do it because we believe our perspective matters – because it might well be your perspective, too.

The Guardian is editorially independent, meaning we set our own agenda. Our journalism is free from commercial bias and not influenced by billionaire owners, politicians or shareholders. No one edits our Editor. No one steers our opinion. This is important because it enables us to give a voice to the voiceless, challenge the powerful and hold them to account. It’s what makes us different to so many others in the media, at a time when factual, honest reporting is critical.

If everyone who reads our reporting, who likes it, helps to support it, our future would be much more secure. For as little as £1, you can support the Guardian – and it only takes a minute. Thank you.