Marketers may not know that they almost saw reduced ad options. If Facebook hadn’t been able to access all of its data on 1.5 billion international users outside of the U.S. and the E.U., advertisers may have seen major changes in their data availability and possibly on their marketing results beginning on May 25. As it is, they’ll likely see such changes with E.U. citizens.

That’s because starting on May 25, General Data Protection Regulation takes effect in the E.U. Then and there, GDPR means marketers and any entities using data for marketing purposes must obtain permission from each E.U. citizen to do so, must erase the data of those who request it, need to allow citizens to manage use of their personal data for marketing purposes, and must follow GDPR for data sharing and third-party usage. Marketers who fail to do so are subject to large fines, beginning on that date.

As a result, many marketers have been getting ready for GDPR.

What Facebook’s Doing About Those 1.5B Users

But Facebook has been taking measures to remove 1.5 billion social network users from being subject to that regulation, Reuters reports. Last week, Facebook confirmed to the wire service that it was changing its terms of service relating to its international users outside of the E.U. who may have been governed by GDPR because Facebook’s international headquarters are in Ireland. But Facebook is changing its terms of service there, meaning 1.5 billion international users outside of the U.S. and E.U. also won’t be covered by GDPR’s privacy measures.

Related story: A Guide to GDPR Compliance for Marketers: What Is GDPR and How to Avoid Fines

Earlier this month, Facebook Chief Executive Mark Zuckerberg told Reuters in an interview that his company would apply the E.U. law globally “in spirit,” but stopped short of committing to it as the standard for the social network across the world.

In practice, the change means the 1.5 billion affected users will not be able to file complaints with Ireland’s Data Protection Commissioner or in Irish courts. Instead they will be governed by more lenient U.S. privacy laws, said Michael Veale, a technology policy researcher at University College London.

Facebook will have more leeway in how it handles data about those users, Veale said. Certain types of data — such as browsing history, for instance — are considered personal data under E.U. law but are not as protected in the United States, he said.

B2B marketers will notice a similar change from LinkedIn, reads the Reuters story. On May 8, LinkedIn will notify non-European who had a contract with LinkedIn Ireland that it will “move non-Europeans to contracts with U.S.-based LinkedIn Corp.”

Now that CMOs know about Facebook’s international data privacy move and why it’s happening, there’s a bit more marketers should know in order to decide what to do about it.

A study announced today by Blueshift and TechValidate does note that 54% percent of marketers don’t use their own data for marketing. One in five employ less than 25% of their customer data “to drive marketing campaigns.” So chances are, they’re using outside data for their ads.

In addition to what’s happening with GDPR, U.S. marketers like Tinder noticed malfunctions when users couldn’t sign into the app using Facebook. Further, TechCrunch reported on March 28 that Facebook “announced that it will end a feature called Partner Categories, launched back in 2013 out of a partnership between Facebook and major data brokers. Third-party data helps Facebook further atomize its user base into meaningful segments for advertisers.”

This all came about because of user outrage about data from 87 million Facebook accounts being used by Cambridge Analytica to create psychographic profiles of users. That data ended up used in marketing targeting voters likely to choose then-candidate Donald Trump and voters in favor of then-active ballot issue, Brexit.

At issue for CMOs is whether this move by Facebook is consistent with maintaining customer trust, as Facebook’s data privacy issues are still a concern for many consumers.

Finally got round to hitting the #deleteFacebook button.
Here’s a few lines I wrote about my decision: http://tobold.org/entry/2018-04-08 …

Even if they don’t delete Facebook. On April 18, SocialMediaToday reports Facebook leaders say ad revenue is the same and most users haven’t updated their privacy settings since the Cambridge Analytica incident and Zuckerberg’s subsequent congressional testimony.

There’s also the factor that this is probably where there competitors are: 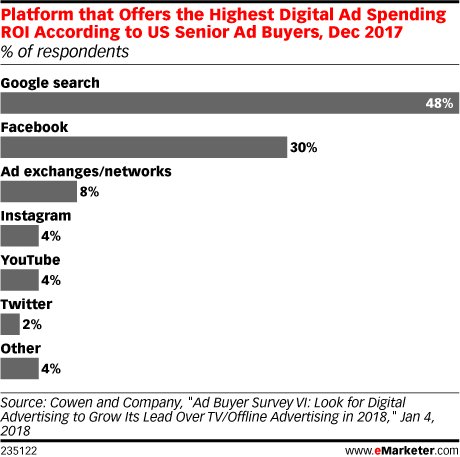 .@Google and @Facebook combined will account for more than 65% of US digital #ad revenues in 2018, @eMarketer estimates: http://emrktr.co/2F2TySZ

“Once the hype around #DeleteFacebook as a media hot topic died down, many surmised that it hadn’t had as big an impact as expected, there are certainly plenty of Facebook users who abandoned the site without fanfare or hashtag.

“For advertisers, this should be of concern, because you may have a smaller targeted audience you can reach through Facebook. Facebook is of course downplaying the impact all the negative press has had on its advertising revenue and user base, but only time will tell how many flee Facebook in the (futile) hopes of finding a social media channel that doesn’t jeopardize and abuse their personal data.

“The best thing to do at this point is to pay attention to what happens next and perhaps look for other places to diversify your advertising and marketing efforts, so as to not put all your eggs in the proverbial Facebook basket.”

What do you think, marketers?

Please respond in the comments section below.