A suspected poison gas attack on the rebel-held town of Douma, near the Syrian capital, has killed at least 40 people, according to Syrian activists, rescuers and medics. USA TODAY

President Trump lashed out Sunday against an alleged chemical weapons attack by Syrian government forces on civilians, ripping “that animal Assad” and laying blame for the Syrian president’s power on Russia, Iran and even former president Barack Obama.

Trump’s tweet storm came hours after the White Helmets, a civil defense force in rebel-held areas of Syria, claimed that entire families were gassed to death Saturday night in Douma and Eastern Ghouta. The group, which put the death toll at more than 40, said many residents were hiding in cellars, suffocating from poison gas.

Syrian state media said Sunday that rebel forces led by the Army of Islam had agreed to leave Douma within 48 hours as Syrian leader Bashar Assad tightened his grip on rebel strongholds around Damascus.

“Many dead, including women and children, in mindless CHEMICAL attack in Syria,” Trump said on Twitter. “Area of atrocity is in lockdown and encircled by Syrian Army, making it completely inaccessible to outside world.”

More: Syria chemical attack would be the eighth since Trump took office

‘Children are dying before our eyes’: Images from suspected Syrian gas attack again tell the story

The attack came less than a week after Trump, speaking about Syria, declared: “I want to bring our troops back home.” A day later, however, the White House signaled that a U.S. withdrawal from Syria is not imminent.

On Twitter on Sunday, Trump demanded that the area be opened up for medical help and verification of a chemical attack, which would constitute a war crime. He called the attack another “humanitarian disaster for no reason whatsoever. SICK!”

Trump blamed Russian President Vladimir Putin and Iran for providing support to Assad. Trump also blamed Obama for allowing Assad to cross his predecessor’s “state Red Line in the Sand.” If Obama had acted years ago, Trump said, the Syrian crisis would have ended long ago and Assad would have passed into history.

Many dead, including women and children, in mindless CHEMICAL attack in Syria. Area of atrocity is in lockdown and encircled by Syrian Army, making it completely inaccessible to outside world. President Putin, Russia and Iran are responsible for backing Animal Assad. Big price…

The United Nations Security Council on Monday will hold an emergency meeting to discuss the suspected chemical attack, reports the Associated Press. The meeting was called by the U.S., United Kingdom, France, Poland, the Netherlands, Sweden, Kuwait, Peru and the Ivory Coast, says the AP.

Reuters says the U.N. Security Council will meet twice on Monday, following a request from Russia as well to discuss “international threats to peace and security.”

A statement from UN spokesman Stéphane Dujarric said the U.N. Secretary-General António Guterres calls on all parties to cease fighting.

More: How do we prevent ISIS 2.0? Withdrawing from Syria is not the answer.

The attack comes a year to the day after Trump authorized a military strike on a Syrian government airfield after a sarin gas attack that killed at least 85 people in Khan Shaykhun.

Russia on Sunday said allegations of a chemical attack are a ruse aimed at justifying military strikes by foreign forces and warned of grave consequences in case of any military retaliation.

“It is necessary to once again caution that military intervention under false and fabricated pretexts in Syria, where the Russian servicemen stay at the request of the legitimate government, is absolutely unacceptable and may trigger the gravest consequences,” Russia said on its U.S. embassy’s Facebook page.

The White Helmets said more than 500 people, most of them women and children, were brought to local medical centers with symptoms consistent with exposure to a chemical agent. Patients showed signs of respiratory distress, burned eyes, foaming of the mouth and other symptoms that included “emission of chlorine-like odor,” the group said.

The reports could not immediately be independently verified. Syria called the claims “fabrications,” and Iran and Russia also denied that any chemical weapons were used.

More: Syria’s civil war has been raging for 7 years and no end in sight

“We strongly reject this information and confirm readiness after Douma is liberated from militants to send Russian specialists in radiation, chemical and biological protection to collect data to confirm that these statements are fabricated,” Yevtushenko said.

The civil war has been raging in Syria for seven years. The toll has been horrifying: The U.N. estimates more than 400,000 people have died. Another 5 million have fled the country, and 6 million more have abandoned their homes but remain within the beleaguered nation of less than 20 million people.

Syrians are no strangers to chemical weapons. An attack in Syria’s Idlib province by government forces a year ago killed almost 100 people, including women and children. An investigation by the international watchdog Organization for the Prohibition of Chemical Weapons confirmed  that sarin nerve gas was used on the town of Khan Shaykhun. 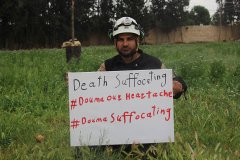 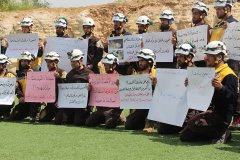 A stand by @SyriaCivilDefe teams to denounce the chemical massacre perpetrated by the regime against the children and residents of the besieged #Douma in #EasternGhouta. #Assad_Bombing_Douma_Chemical