WASHINGTON – Neil Gorsuch had been a member of the Supreme Court for exactly 11 weeks when he made clear in a single day what type of justice he would be.

The court struck down an Arkansas law that treated same-sex couples differently than opposite-sex couples on their children’s birth certificates. Gorsuch dissented.

The court refused to consider a challenge to the Department of Veterans Affairs’ system for evaluating disability claims. Gorsuch dissented.

The court declined to hear a challenge to a California law limiting who can carry a concealed gun in public. Gorsuch dissented.

And the court turned aside a challenge to the meager sum Mississippi paid when it converted a former landowner’s property into a park. Gorsuch said the justices should hear a similar case “at its next opportunity.”

Thus it was that on the last day of its 2016-17 term — as the court addressed gay rights, government power, gun ownership and government takings — Neil McGill Gorsuch announced to the legal world that he would not go along to get along.

“He came to the court more ready to jump into the deep end than a lot of recent nominees,” says Jonathan Adler, a law professor at Case Western Reserve University School of Law.

Gorsuch has been jumping in ever since.

“What you’re seeing is a justice who believes the court has a responsibility to decide cases,” says Leonard Leo, executive vice president of the Federalist Society and an outside adviser to President Trump on judicial nominations. “I don’t see in Justice Gorsuch the same kind of incrementalism that some of the other justices have.”

In the nine months since that declaration of independence, Gorsuch has receded from the headlines he commanded as Trump’s first Supreme Court nominee. But he has not retreated from his core beliefs that the court should favor the words contained in the  Constitution and federal laws over the supposed expertise of the federal bureaucracy.

Nor has he disappeared from the public eye following some early, often unfavorable reviews: that he was impudent toward colleagues, pedantic in his rhetoric, and tone-deaf to criticism that he was cozying up to conservatives.

“Tonight, I can report that a person can be both a publicly committed originalist and textualist and be confirmed to the Supreme Court,” he told a Federalist Society audience in November.

Living up to expectations 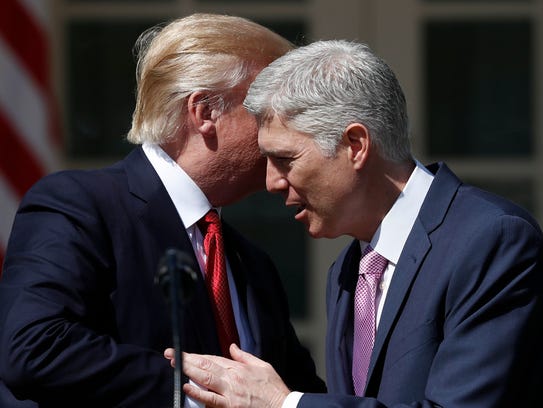 President Trump’s selection of federal appeals court judge Neil Gorsuch for the Supreme Court was but the first of many judicial appointments. (Photo: Carolyn Kaster, AP)

It helps to have a vacancy — in this case, one created by the unexpected death in 2016 of the high court’s conservative leader, Antonin Scalia, who brought adherence to the Constitution and legal texts into the mainstream.

It took 14 months for the White House and Congress to settle on a successor. President Barack Obama’s nominee, federal appeals court Judge Merrick Garland, was blocked by Senate Republicans before Trump nominated Gorsuch from a list of 21 potential choices on Jan. 31, 2017. It took another 10 weeks, $17 million in outside spending and a Senate rules change to win confirmation without the 60 votes previously required to reach the Senate floor.

Despite the histrionics, Gorsuch emerged from the confirmation battle relatively unscathed, a tribute to his impeccable credentials as a Denver-based judge on the U.S. Court of Appeals for the 10th Circuit. He had degrees from Columbia, Harvard Law and Oxford and a high-level stint at the Department of Justice. His mother, Anne Gorsuch Burford, had been in President Ronald Reagan’s Cabinet.

Gorsuch took his seat four months short of his 50th birthday, becoming the first former Supreme Court law clerk to serve alongside his ex-boss, Justice Anthony Kennedy. In short order, he was peppering lawyers with questions such as “Where in the statute is that provided?” and admonishments such as “I look at the text of the Constitution, always a good place to start.”

“I really don’t think we could have seen a justice any more committed to textualism and originalism than he is,” says Randy Barnett, a professor at Georgetown University Law Center. “He has lived up to very hard expectations.”

Liberals saw his loud entrance differently, decrying his legal philosophy, his behavior on the bench, and his writing style. Ian Millhiser, a senior fellow at the Center for American Progress, warned early on that “Gorsuch will make liberals miss Scalia.”

In his initial opinions, concurrences and dissents, Gorsuch has done just that. When the court allowed part of Trump’s immigration travel ban against majority-Muslim countries to be implemented temporarily, he said he would have green-lighted it in full. When the court ruled that a Missouri church can receive public funds for playground resurfacing, he said religious discrimination is unconstitutional “on the playground or anywhere else.”

The U.S. Chamber of Commerce has filed friend-of-the-court briefs in 10 cases decided since Gorsuch came on the court last April, and he’s taken their side nine times, along with most of his colleagues.

“It does seem that he is being that reliable, pro-corporate vote that business thought he would be,” says Elizabeth Wydra, president of the liberal Constitutional Accountability Center.

Gorsuch has teamed up with Justice Clarence Thomas, the court’s most conservative member, in several dissents. Last year, the pair unsuccessfully urged their colleagues to consider lifting a ban on unlimited contributions to political parties. This year, they failed to convince the court to consider limiting administrative agencies’ authority to interpret their own regulations.

But when the court refused to hear a challenge to California’s 10-day waiting period for gun purchases, Gorsuch surprised some conservatives by not joining Thomas’ lone dissent. The decision came just days after a gunman killed 17 students and teachers at Marjory Stoneman Douglas High School in Parkland, Fla. 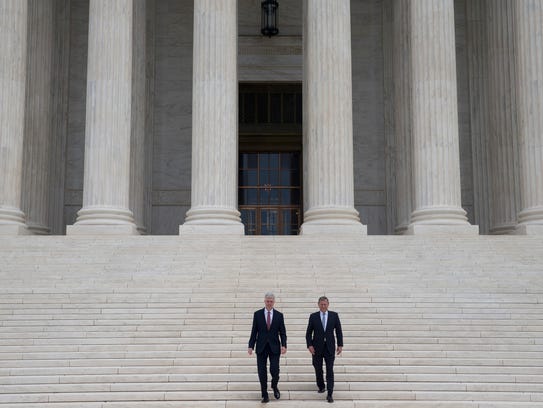 If Gorsuch shied away in that case, he hasn’t been shy often.

He wrote a lengthy, 12-page dissent to Justice Ruth Bader Ginsburg’s opinion in the first case he heard, suggesting that the court “just follow the words of the statute as written.” He said Kennedy’s landmark 2015 opinion declaring same-sex marriage constitutional did not address — “let alone clearly” — the birth certificate challenge brought by two lesbian couples in Arkansas.

His willingness to speak at Trump International Hotel last September sparked objections from some ethics experts who noted a case involving foreign payments there could one day reach the high court. Gorsuch used the occasion to urge that fellow conservatives “cherish the din of democracy.”

That din hangs over major cases to be decided by the end of June involving the power of public employee unions, the religious rights of same-sex marriage objectors, partisan efforts by states to influence elections and other issues. Gorsuch’s vote could be critical in several of them — and that worries liberals.

“So far he’s staked out extremely conservative positions,” says Nan Aron, president of the liberal Alliance for Justice. “He is as ultra-conservative as we predicted he would be.”

Gorsuch’s efforts, however, may be driven more by judicial philosophy than ideology. His devotion to the balance of powers outlined in the Constitution, for instance, will make him a force on the court for cutting back on the power of what conservatives call the “administrative state.”

Two cases granted for next year — presumably with Gorsuch’s support — may advance that cause. One questions the attorney general’s authority to decide whether a sex offender law’s registration rules should apply to those convicted before it was enacted. The other challenges the U.S. Fish and Wildlife Service’s power to preserve habitat for a rare breed of frog without judicial review.

“I think Justice Gorsuch would want to see courts be more skeptical of how much power the bureaucracy has, and to require Congress to pass more precise laws,” says Josh Blackman, an associate law professor at South Texas College of Law who follows the Supreme Court closely.

On that subject, Gorsuch is ahead of Scalia, who once put more faith in the executive and legislative branches. But in other ways — from his core legal philosophy to his supreme self-confidence — he is very much like his predecessor on the court.

“Lots of people were painting him as some sort of monster,” says Carrie Severino, chief counsel at the Judicial Crisis Network, which spearheaded the effort to get Gorsuch confirmed last year. “There hasn’t been a dramatic shift on the court, and that shouldn’t be surprising.”

More: For Supreme Court, the term that just ended was the calm before the storm

Register with USA TODAY for a chance to
Win a $4,500 Carnival Cruise Line Gift Card.
ENTER NOW
Must be registered with USA TODAY NETWORK to win. Entry period 3/26/18 – 4/13/18.
See official rules for details